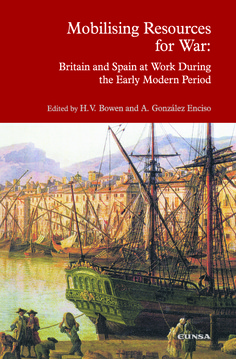 Britain and Spain at work during the Early Modern Period

In recent years considerable scholarly attention has been focused upon the war-driven development of European states during the seventeenth and eighteenth centuries. In particular, some historians have attributed the long-run success of Britain to the emergence of a `fiscal-military state´ whose essential characteristics were shaped by the increasingly heavy demands of war. This has generated much debate about the role, function, form, and strength of the British state, and as such the model provided by the fiscal-military state offers a good point of departure for further discussion of the various ways in which European states endeavoured to organise financial, material, and human resources for war during lengthy and recurring periods of warfare.
This collection of essays draws upon papers presented at an international symposium hosted by the University of Navarra, Pamplona, Spain in September 2004. The essays explore further the relationship between war and the development of the state by examining in detail how Britain and Spain gathered, organised, and deployed resources in support of recurring and extended national war efforts that were becoming increasingly global in their scope and form. In particular, the essays explore the multifarious relationships between the offices and departments of central governments and private agencies (contractors, companies, financiers, and firms) that played an essential role in mobilising the resources that underpinned military and naval activity.
By offering perspectives on two of the great european powers, it is hoped that new light will be shed on the paths taken by public-private alliances in different states, thereby enabling a better understanding to be gained of the underlying factors that ultimately enabled Britain to prevail over her rivals.